These are the new vocabulary words we introduce in this lesson.

A word in Konkow may have several parts to it each of which contributes to the meaning of the word. We’ll call these parts “components.” (In Ultan’s work, they are called “morphemes.”)

The main component (the root) may be followed by one or two or many suffixes (that is, smaller parts that follow the root.) 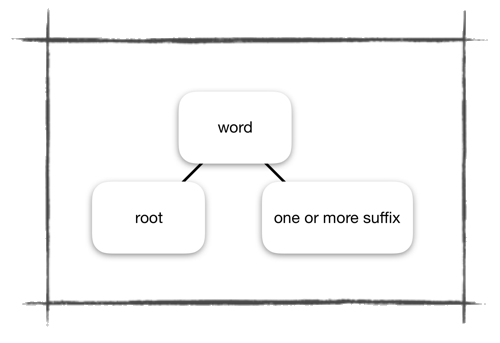 Many of these suffixes are used with extended or metaphorical meaning as well.

-nak can be used to talk about time, as in

or for numbers, as in


-na: can be used like an instrumental, as in
pétina:sa wó:non 'He died from poison'.

Note that in the second example, part of the root is “reduplicated” – that is, a part of it (or in this case all of it) is repeated. If it were a verb, this would make the word mean that the action is occurring over and over or continuously for a long time. As a noun, this repeated part just means ‘red tail hawk.’ But the hawk was probably named by the call that it makes over and over.

Words can be nouns or verbs, pronouns, demonstratives, adverbs, or what Ultan calls “minor words”. Which kind of word they are will determine what kinds of suffixes they can take. A noun, for example, can have “case” suffixes – suffixes that tell us what the role of the noun is in the sentence.

We will talk about the suffixes that go on verbs in later lessons. In this lesson we will focus on noun suffixes.

And here are some more case suffixes, that go better with inanimate nouns:

-ni ‘instrumental' (use it to do something)

this also translates as “with” sometimes, so don’t confuse it with the ‘with’ that means ‘accompanying.’

Many of these suffixes are used with extended or metaphorical meaning as well. -nak can be used to talk about time, as in núktinàk ‘for a little while’ (núkti means ‘little’), or for numbers, as in máhc’oknak sá:p’y ‘thirteen’ (literally ‘toward 10, 3). -na: can be used like an instrumental, as in pétina:sa wó:non ‘He died from poison’.

Besides case suffixes, there are other suffixes that can go on nouns as well, that talk about number (two, many, a group) or special quality (little):

You can put more than one suffix together in a noun. The suffixes about number or quality will always come before the case suffixes.

In the first sentence, the suffix is -be: instead of -beh because the (h) is dropped before some consonants, leaving an elongated vowel. In the second sentence above, the subject marker is -om. Why isn’t it -im? There is a process called vowel harmony that changes i to be like the vowel that precedes it.

This only happens when the consonant between the two vowels is k or k’.

Put the correct suffix on each of the nouns below, using the English sentence to guide you.

Translate these words and phrases into Konkow, using noun roots from this and earlier lessons.

Translate the following sentences into Konkow, using the right suffix or suffixes for each noun. Remember that the typical word order is Subject Object Verb. And don’t forget to put the -n on the verbs.

The fish swam toward the woman.

The young man walked with Coyote.

The woman’s daughter grabbed the acorn.

The group of deer watched the river.

The two girls saw many deer.

The little bear clapped his hands.

Using the vocabulary you know so far (including from lessons 1, 2 and 3), see if you can make your own sentences using these suffixes on other nouns.

Using the vocabulary you know so far (including from lessons 1 and 2), see if you can make sentences using these suffixes on other nouns.

Verbs have their own kinds of suffixes, such as tense (e.g. past, future), commands, negatives, questions, etc. You saw the verb ending -n (-in) in the previous lesson. Some verb suffixes come before the -n, and some (like the commands) come instead at the end.
Tree for c’ekyn ‘cause to see’ goes here

You can see a complete set of all noun and verb suffixes in the Noun Endings and Verb Endings charts on the website. If you thought there were a lot of noun endings to learn, wait til we get to verbs!

Identifying words in the Turtle Girls story.
Go through “Coyote and the Turtle Girls”, and find ten individual nouns that have at least one of the suffixes described in this chapter. You can listen to recordings of the story line-by-line and follow along with the written text. Two examples from “Turtle Girls Analysis” are given in the chart below. See if you can complete the rest of the chart with different nouns, underlining the suffix(es) you recognize. How many of the noun endings you saw today can you find? Always try to say out loud the words and passages that you read or write.

Identifying roots and suffixes in nouns
Navigate to the CHARTS page on konkow.org. Click on the link for NOUN SUFFIXES. Scroll through the chart and click on suffixes that interest you, to see a sample word or sentence using it. (Try to say those sentences out loud.) In each case, write the noun that has that suffix below (you don't have to write the whole sentence.)


The first one is completed for you, with suffixes seperated by dashes. In the example, the rule for vowel harmony applies. If you find nouns that exhibit vowel harmony or h- dropping.

talking to each other

Reduplication
Some nouns (and verbs too) have reduplicated roots (a syllable repeated twice). Go to the Audio dictionary under SEARCHES and scroll through the alphabetic listings and see if you can locate any examples of reduplication. Write the examples below. The first is completed for you. Underline any affixes you recognize.

Want to learn more? All the Mary Jones videos lessons are available HERE

FLASHCARDS - LESSON 4
or you can download a PDF of the lesson here DOWNLOAD - LESSON 4
Each lesson has a set of flashcards that can be printed and used for practice. As you work through the lessons, the sets can be combined to create more advanced sentences. There are several fun games you can play using these flashcards. The cards can be printed either single or double sided depending on what and how you want to play. Three games will be outlined below.


Go Fish
This is a multiple player game. It can be played from a basic level with simply the vocabulary words, to a more advanced game where all the questions are asked in the language. At the most basic level, you can play with an open hand. The object is to get pairs and practice the vocabulary. You will need to print two or four copies of each card to play Go Fish and Concentration.


Concentration
This can be played individually or as a multiplayer game. Cards can be double sided or single sided. Pictures can be facing up or hidden. You can match pictures and/or words.The object is to find matches and pronounce the vocabulary.


Flashcard Drills
This can be played individually or as a two player game. One person shows the image to their partner, who says the Konkow word. This is repeated until each player can identify and pronounce each card in the stack. The amount of cards in the stack can be increased as needed.